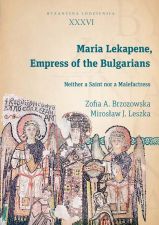 Chapter I. Sources – Zofia A. Brzozowska 7

Chapter IV. The Marriage with the Bulgarian Ruler – Honor or Degradation? – Zofia A. Brzozowska 59

Chapter V. Maria Lekapene as a Mother – Zofia A. Brzozowska 71

Chapter VI. On the Bulgarian Throne at Peter’s Side – Zofia A. Brzozowska, Mirosław J. Leszka 79

Chapter VII. Maria Lekapene and the Transfer of the Idea of the Imperial Feminine in Medieval Bulgaria – Zofia A. Brzozowska, Mirosław J. Leszka 99
1. Female Authority in Byzantium – Mirosław J. Leszka 101
1.1. The Byzantine Model of the Empress 101
1.2. The Empress’s Court 105
1.3. Coronations of Empresses 109
1.4. Imperial Wedding Ceremonies and Festivities 112
1.5. Participation in Secular and Religious Ceremonies 114
1.6. Philanthropy and Donation Activities 118
1.7. Political Influence of Byzantine Empresses 120
1.8. Rule from Behind the Throne 122
1.9. Female Regents 128
2. Maria Lekapene, Empress of the Bulgarians – Titulature, Seals, Insignia – Zofia A. Brzozowska 131

Appendix. Maria Lekapene and Peter in Medieval Rus’ Historiography – fragments of the Hellenic and Roman Chronicle of the second redaction – Zofia A. Brzozowska 155

Krótkie streszczenie: The book presents the biography of Maria, daughter of Christopher Lekapenos (the eldest son of emperor Romanos I). For about 35 years, she was the tsaritsa of the Bulgarians at the side of her husband, tsar Peter (927–969). Her character is but dimly visible in the sources; interestingly, the few sources that do mention her are almost exclusively of Byzantine provenance. Most scholars who have dealt with her life – usually, we may add, as a side note to their studies on Peter’s reign – saw in her a representative of the interests of Constantinople and a propagator of Byzantine culture. Some have gone so far as to call her a Byzantine agent at the Bulgarian court.
Through their meticulous analysis of the primary sources and profound knowledge of the literature on the subject, the authors of the book – the first monograph on Maria ever to have been written – are able to construct a balanced narrative of the tsaritsa’s life and her role in 10th century Bulgaria, putting aside biases and negative emotions.
The publication is supplemented by a translation of the fragments of the Hellenic and Roman Chronicle of the second redaction devoted to Maria and Peter.

Zofia A. Brzozowska and Mirosław J. Leszka treat the protagonist of their book with undeniable sympathy (as signaled already in the title). Following the footprints of Maria Lekapene, the authors paint a vivid picture of Byzantium in the first half of the 10th century, as well as present the history of its neighbor – the Bulgarian state; for it is there that the grand political game of the Constantinople court ‘cast’ Maria, daughter of Romanos Lekapenos. The biography of Maria Lekapene (...) is an eagerly awaited publication in the international Byzantinological and Slavicist community; I predict that it will be a scholarly success. (...) The authors of the book (...) are eminent experts in the field of Byzantine history, which guarantees the factual accuracy and high scholarly level of the work (...).
Prof. Ireneusz Milewski, University of Gdansk
Prezentacja wideo produktu: Maria Lekapene Empress of the Bulgarians Neither a Saint nor a Malefactress