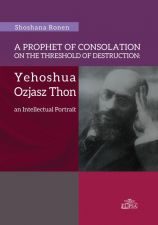 A Prophet of Consolation on the Threshold of Destruction: Yehoshua Ozjasz Thon, an Intellectual Port

Krótkie streszczenie: A study of a prominent figure on both Jewish and Polish political landscapes in the historical period which lasted from the beginning of the final years of the nineteenth century to the late 1930s, represents a scholarly undertaking of a particularly challenging nature. The project revives, so-to-speak, a practically forgotten epitome of the era, the multifaceted figure of a Jewish scholar, rabbi, and Zionist, who supported the idea of the Jewish state and who, at the same time, was an ardent believer in full integration of Polish-Jewish citizens into the Polish national and cultural landscape.
Shoshana Ronen’s embarking on an intellectual biography of Thon is an extremely courageous undertaking not only because of the purely technical difficulties involved in locating the relevant archival materials, but also because the catastrophic event of the Holocaust that followed Thon’s death forebodes an anachronistic dismissal of Thon as a seemingly outdated figure. Ronen deals with these problems with admirable tact and expertise. Both her painstaking and thorough use of primary sources, which supports the profound historical, sociological, and political nature of the period, and as well as her ability to empathically step into Thon’s complex Weltanschauung defy these concerns.
I would argue that the fascinating and very much alive portrait of Thon as a philosopher, community leader, and politician that emerges from her study is of invaluable merit not only to the history of the Polish Jewry, but also for the understanding of the Polish mentality of the period as well as their interaction. Interestingly, the figure of Thon in Ronen’s insightful study displays qualities which prove relevant to the presentday Polish-Jewish interaction. His “naive” optimism about the Polish acceptance of the Jews as part of Polish history and culture seems to come true in today’s widely spread inclination in Polish academia, arts, and politics to acknowledge the Jewish contributions to the history of Polish cultural heritage. … Ronen’s book represents not only a major scholarly accomplishment, but also a timely contribution which will speak to the public beyond the academia. /Rachel F. Brenner, University of Wisconsin-Madison/
Opinie, recenzje, testy: